Chris and Ashley met through a mutual friend in April of 2013.  Chris had just started his production company, Bruce Productions, and Ashley was coming off a big promotion at work.  Needless to say, both were focused on their careers and neither had time to be bothered with a relationship.  Over the next year and a half they spent a lot of time together going to concerts, binge watching multiple seasons of sci-fi shows, checking out new restaurants, cleaning/organizing Chris’s house, and building a truly incredible friendship. 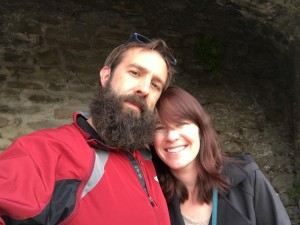 Everything changed for Ashley in August 2014 when Chris was involved in a terrible head-on collision.  She recognized that not only had Chris become her best friend, but he had also stolen her heart.  Knowing her feelings were too strong to ignore, she realized she had to tell him.  After a long and eye-opening conversation, the two of them agreed their friendship had grown into something much more. 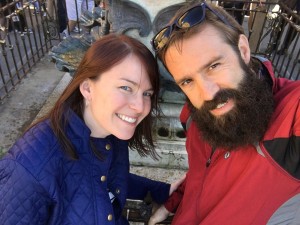 The next six months were full of exciting moments for the couple – among the highlights:  meeting each other’s families; moving in together; and a promising change in career for Ashley.  When Chris suffered a devastating knee injury in May 2015, his fighting spirit and positive attitude helped Ashley realize just how much she loved him.

In October 2015, they spent an amazing 12 days exploring Italy, and in Florence, Ashley presented Chris with a lock to commemorate their trip.  On one side, their initials had been engraved, and on the other, a question:

After Chris picked himself up off the ground and asked if this was real . . . He said yes.  Avoiding the local authorities, they placed their lock on the rails of the fountain gate at the center of the famed Ponte Vecchio and tossed the two keys, one at a time, into the river.  There was only a slight pause in Chris’s throw, but flying it went. 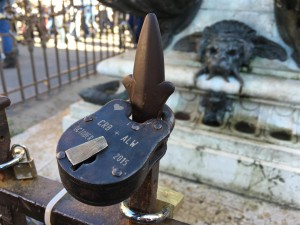 Later that night they decided to share the good news with the group at dinner.  You can be a part of that moment in the video below.

Don’t worry . . . Chris ponied up, got her a ring, and did what any good boy should do and surprised Ashley with it on New Year’s with a tiny chair stuck to his backside.

Copyright © 2016 Bruce Productions - All Rights Reserved
Back To Top
×